Such was the case when I met a classical guitarist more than seventeen years ago. He copied a recording of his guitar quartet on CD as a takeaway gift.

The next time we met, I brought the only piano guitar piece I owned — an arrangement of Vivaldi’s guitar concerto for guitar and piano. Eager to find more pieces to play, I visited music bookshops in my travel as magazine editor. He arranged music for us to play. Before long, we had collected and arranged enough sheet music to give a concert. Soon composers started writing for our piano guitar duo.

The subtitle of our first concert at the Makawao Union Church in Maui, in December 2007, was “four centuries of music for piano and guitar” —- which comprised of arrangements, original compositions, and commissions. We released the live recording of the concert as a CD in January 2011.

Nearly two decades later, the guitarist is conductor of a guitar orchestra while I have founded my own ukulele group. How do we combine the two? Is it possible? 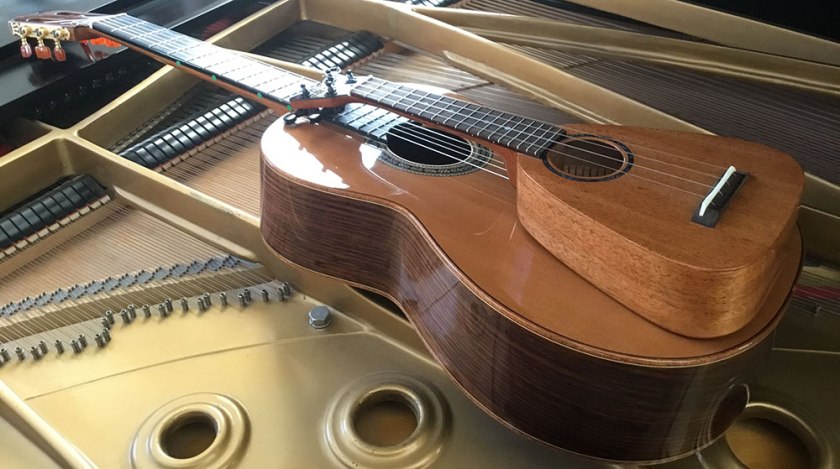 One definition of orchestra is a group of musicians that play different instruments together. Thus a guitar orchestra should really be called a guitar consort or guitar ensemble, for all instruments are equal-sized guitars, yet “guitar orchestra” is the term. In contrast, a ukulele orchestra is made up of different sized ukuleles, with baritone and bass ukuleles tuned differently from soprano, concert and tenor sized ukuleles. In both cases, there are more than one part, with the default in the case of guitar orchestras being four parts, a tradition stemming from guitar quartets.

Perhaps the word orchestra is used for inclusiveness, or rather, future inclusiveness. The term does not rule out the possibility for other guitar shaped objects (GSO) such as the electric bass guitar, lute, mandolin, banjo, steel-string guitar, slide guitar, and ukulele. Still, a traditional guitar orchestra is made up primarily of GSO of six nylon strings, to be played with fingernails and not picks (plectrums).

What is in a name? When ukulele players get together on a regular basis, they form a group or a club. It’s not an ensemble or orchestra because there are no separate parts to read and study. The ukulele players read off a song sheet comprised of letters for lyrics and chord names. Each player can choose his or her own strum pattern, and even pluck the riffs and melodies at will. There’s no prerequisite to read Western notation or tablature. They sightread the song sheet, for few bother to study beforehand. What holds them together is prior familiarity with the song. The song sheet serves as a guide. In contrast, sheet music for the guitarist in a guitar orchestra contains much more detail.

That the classical guitar and the ukulele are both guitar shaped objects means they have much in common. Players of both instruments can pluck, strum, do harmonics, and treat their instruments as percussion, hitting or tapping different parts for different sounds and effects.

As ensembles, however, the guitar and ukulele take very different approaches and play very different music. As a member of the guitar orchestra, I study my part beforehand. I don’t know what it sounds like until we play together. We meet to rehearse for the purposes of practising as a group for a future performance. This is called presentational music making. In ukulele groups, we play and sing unison by default. Unison can be powerful when executed well. Playing and singing parts (harmonising) can also sound good, beautiful even but the notes are not written out. We call our regular get-togethers jam sessions for we are both performers and audiences. This is called participative music making. The two kinds of music making are at opposite ends of a spectrum.

How do we combine our group loves? Welcome ukuleles into his guitar orchestra? Welcome guitar players to my ukulele group? And what music can we play together? Does it already exist or do we have to compose, arrange, transcribe, or commission?

As one of the earliest bloggers (since 1999), I enjoy meeting people who embrace "out-of-the-box" thinking and fear not the unknown. I believe in collaboration for sustainability because it increases stakeholder value. View all posts by BLOGmaiden